Read my journey in your language :)

There was an error retrieving images from Instagram. An attempt will be remade in a few minutes.

I honestly did not know about Cappadocia and its magnificence before I started researching about Turkey. I confess I was bowled over by the scenic landscape , the gargantuan fairy chimneys emanating from the ground , the sheer expanse of Goreme Open Air museum (UNESCO world heritage site) and of course the indescribably mesmerising and my high point (pun intended ) of the Turkish visit – the hot air balloon ride. 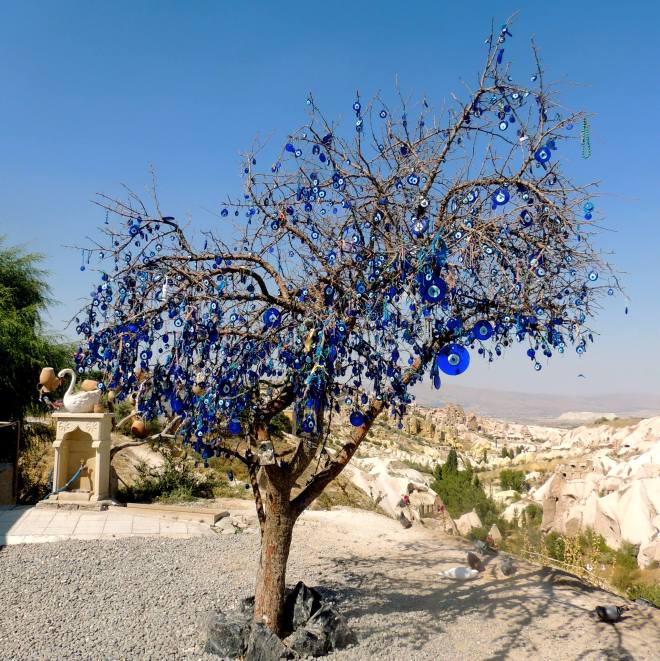 I spent 2 nights in Kapadokya which is an aerial hop away from Istanbul. I chose to stay in Nomad cave Hostel which is a beautifully built hostel decorated with traditional Turkish carpets and off white walls. It was a 40 minute ride away from Neveshir Airport. As I reached my hostel and enquired about the daily available tours , I realised that the next tour would start in few minutes ! Because I was there only for 2 days I could not afford to “waste” a day by chilling at the beautiful hotel !

Enter , Turkish hosptality to my rescue . The guy from my hostel quickly made few calls and whisked me away in his car , raced on the treacherous terrain of Cappadocia  to the place where the tour originated from and I made it ! There were 2 mini vans of tourists and we were all set to visit Ilhara valley which is a hiking heaven for locals and tourists alike . Ilhara valley boasts of about 60 Byzantine churches and  , caves , chapels dating from 11th century ! The dramatic gorge is cut by Melindiz river  through the volcaninc landscape of Cappadocia. Most visitors join a tour like me and enter the valley via the 360 steps from Ilhara tourist office and exit at Belisrma . The whole trail is around 2 hours long and is laden with awe inspiring ancient establishments . If you want to go off the beaten track you can take the trail from Ilhara tourist office and exit at Selime . 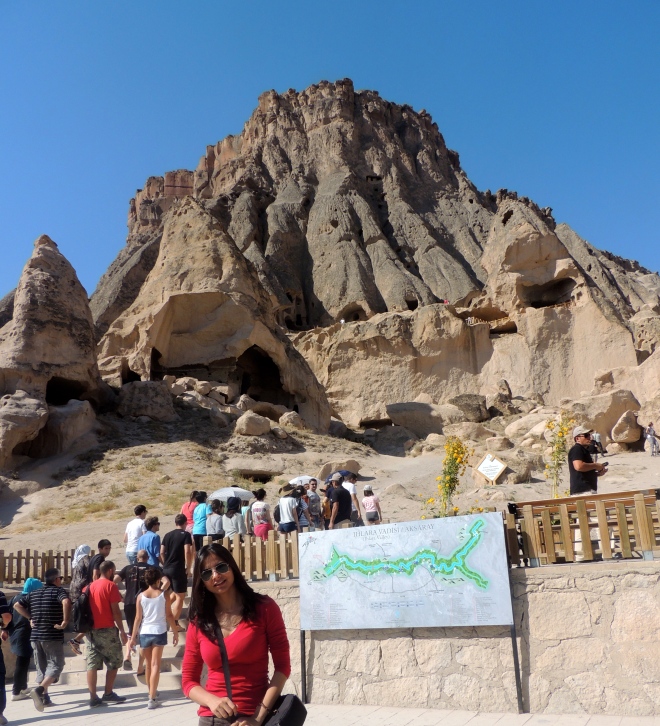 Our second stop was around 62 kms away from the previous one an approximate an hour drive . They were the old underground city of Kaymakli. The architecture will leave you wondering and baffled at the fact of this scientific master piece in the absence of technology. The underground  city of Kaymakli is 8 floor deep however visitors are allowed entry only till the first 4 floors and is one of the largest underground settlement in the region. Archaeologists claim that this city could house 3500 people ! I touched the sturdy walls and marveled at their strength and the fact that they withstood the tests of time. Back home we have civilizations bearing the testimony to human tenacity and industrialism , much like Kayamakli.

After the day in the underground marvel , I planned to be touristy and experience the famous Turkish night. Most of the tour operators offer Turkish night show as a package with Hot air ballon ride or other tours in Cappadocia . It sure is a fun and easy way to relax , devour the delicious Turkish cuisine , watch the whirling men performing Sufi dance  and witness the ever sexy  dance Halay.  Halay is a famous Turkish folk dance practiced in some regions of the country. The smooth moves by the dancer made me secretly question my own flexibility ( It sucks !!).  The Turkish night lasts for approximately 3 hours and is a great way to enjoy , meet other travellers and experience a part of the rich culture offered by Turkey. It was succeeded by a large bonfire on the chilly night which gave everyone a chance to mingle and share their stories .

This activity a must do on all the tourist sites and “Top things to do in Turkey” list. Now I must say I was not expecting too much from this so called “tourist” trap. And I was proven hugely wrong. The thrill of being gently lifted off the ground was surprisingly different from the loud and obvious take-offs I was used to . The landscapes are best described in pictures . As the hot air balloon takes to the sky you can see the ground beneath turning magnificently breathtaking. 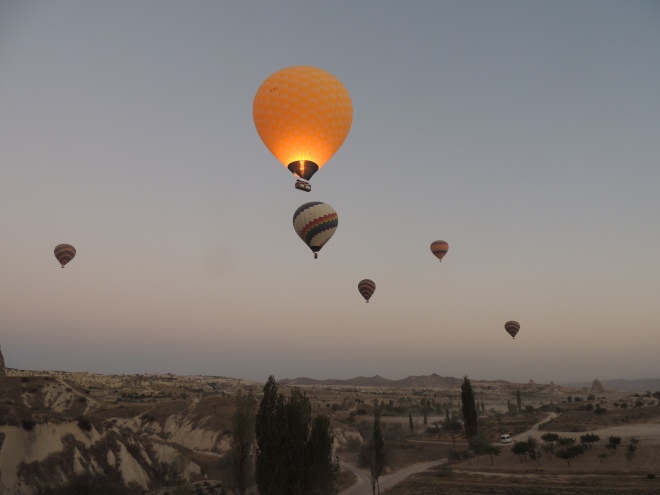 The stone cut formations rising from the volcanic land of Goreme are a treat to the eyes when witnessed from the vantage point few hundred metres off ground. I met a 80 year old Australian lady who overcame her fear of heights by challenging herself to try the balloon ride . Her zeal of  defying her age old (pun unintended ) fears and tread in to uncomfortable terrain was inspirational.

Most of the tours offering the balloon ride start at an unearthly hour (read when the morning sky is still dark) as the principle is to capture the outstanding beauty of dawn.A Brazilian couple next to me chose Turkey to mark their 5th anniversary and graciously invited me to their country. The ride lasts for approximately one hour from its inception and the price ranges from around 110USD to the more luxurious and exclusive ones priced at around 550 USD. All the tours offer “Champagne breakfast” (a flute of Champagne ) to celebrate your success at the end of the ride .

As the sun rises from the horizon its a tussle to determine which scenery is more splendid.

The landscape changes its colour from pale white in the pre dawn light to hues of orange as the day begins to unfold. The volcanic formations beneath start to bathe in the warm early morning rays.

Breathtaking will be an understatement for this spectacle.

And there was more to Kapadokya – Pigeon Valley and Fairy chimneys !!!

One of the many enchanting and truly heart touching travel experiences I had , was in Turkey . While I was treading through the dusty by lanes of Istanbul on a lazy afternoon , along with my two new friends , we were warmly invited by a shop keeper who made handicrafts into his quaint shop. While we were checking out the designs , he offered us the traditional mint tea and we all indulged in a wonderful conversation which encompassed Ottoman empire , surge of immigrants in Turkey , the usual dissatisfaction with the government and his love for different cultures . It once again reinforced my learnt fact that though we all belong to different demographies , we still are essentially the same . He gifted us with handmade ear rings (mine were turquoise blue ) as a souvenir and bade us goodbye . Incidents like these re establish the fact that not all things written in the news paper and transmitted by media are true . People look out for each other be it in Turkey , Nicaragua or New Delhi . Needless to say ,those blue earrings are one of my prized possessions . 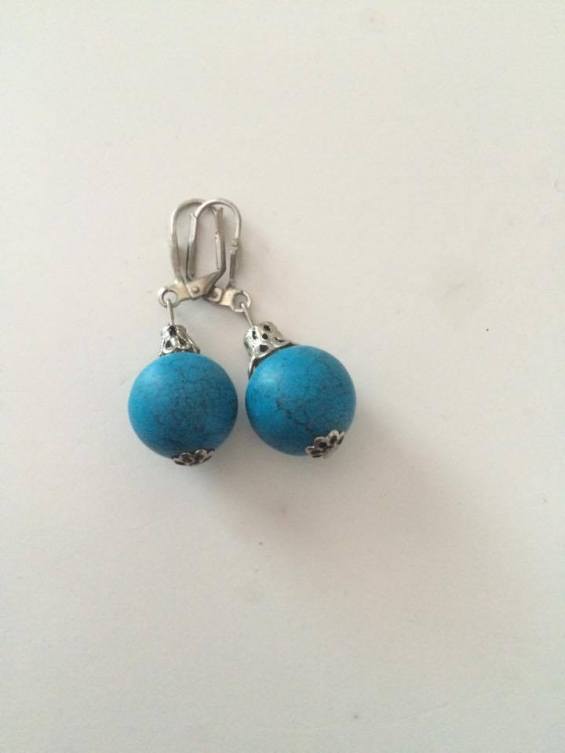 Do’s and Don’ts in Turkey / Cappadocia

As I always recommend , exercising common sense is the key to safe solo female travel. Turkey has a good mix of conservative and modern dressing. A lot of women dress in jeans and dresses , and a considerable number of them use head scarves and traditional clothing . Comfortable shoes will go a long way ( pun unintended) , in Cappadocia and Istanbul alike as the streets are cobbled  and terrain can be rough . Also , a quick weather check before packing would be a good idea . Istanbul , like any other big city , has its own areas where venturing in night as a lone female would not be a good idea. Sticking to Istikal for nightlife would be a good idea. Again , sunscreen would be your best friend in Istanbul and Cappadocia .

So here was my journal of Turkish trip . One of the most culturally rich countries I have been to .  Don’t let the media fool you . Enjoy Turkey and come back being more enriched , improved and with your pair of ear rings :)))